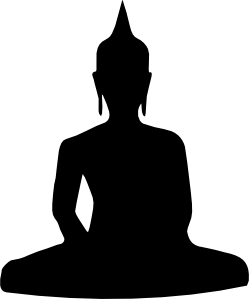 Off to meditation night at the Buddhist Temple. Awesome Theravaden meditation center. Been going for about a month now. Started back into my meditation practices almost 2 months now. I like it. Theravaden Buddhism has a strong emphasis on ethical living which is important for a 'selfish' rebel such as myself. As a recovering addict it adds much to my recovery and sense of well being. I began in Buddhism about 4 years ago and spent some time at a monestary. But I was not doing it to improve my life, I was there to escape. I'm planning on going to a Vipassana meditation retreat in January. It stretches mindfulness to extreme limits and greatly throws the person involved into indepth meditation. 10 hours of silent / sitting meditation a day for 10 days.
So right now I'm putting that method into practice (although nowhere near 10 hours a day) so I can get used to the discipline of sitting. Right now I've been sitting daily for two sessions of 25 minutes each. And my attitude has gotten a little better since I've been doing it daily. Such a powerful method that I've actually quit smoking for about a week now, and have cleaned my house. Not a big deal for 90 % of people, but for a lazy, undiciplined person as myself it's huge. I've been wanting to do both for 3 years now.
So off to the Dhamma to sit for an hour and a half. And the beauty of it is, is some members from my local recovery group have shown up. It makes me feel not so 'strange' since I know there are others in recovery in Nashville who have felt the benefits of the Buddhist teachings.